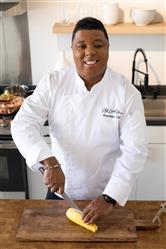 Chef Carlos Brown is an award-winning celebrity chef who has climbed the ranks in the culinary world by letting his dishes speak for themselves. As not only a celebrity executive chef, but a restaurateur and entrepreneur, too, Chef Carlos Brown has set himself apart with a track record that is quite deserving, which started in his mother’s kitchen in Charleston, S.C.  Chef Carlos has whipped up dishes for celebrities like Shaquille O’Neal, Oprah Winfrey, Danny Glover, Michelle Obama, Whoppi Goldberg, Tyler Perry, Viola Davis, Ray Lewis and more. Today, Chef Carlos is the owner of Shrimp & Grits Cafe and founder of C3 Culinary Group. He has been featured in the Smithsonian African-American Museum for his authentic shrimp and grits dish and also has a day named after him in the city of Charleston Chef Carlos Brown Day, on August 23 every year..  Chef Carlos has dedicated his time and efforts to teaching youth the importance of culinary arts to inspire and nurture the next generation with the creative skills, education and training to achieve their goals in hospitality. Chef Carlos strongly believes hospitality can change the world, and at his non-profit, C3 Culinary Camp, Inc., he helps make an impact in the lives of youth and special needs children.